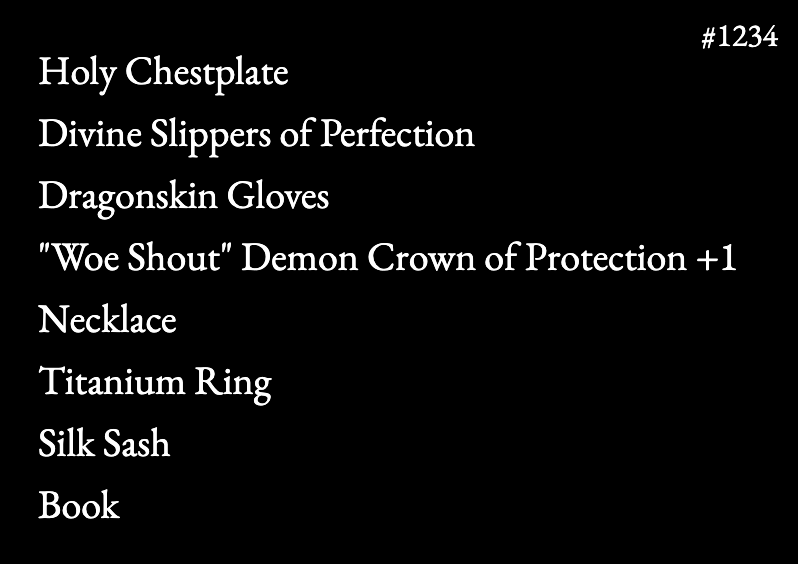 The Loot project has been the talk of Crypto Twitter lately. For those not familiar, Loot is the basis for a fantasy/adventurer role playing game implemented as an NFT project. Each Loot “bag” is a randomized list of eight item names (e.g. Divine Robe, Grave Wand, Platinum Ring of Rage, etc.). And that’s it. No art, attributes, story, or company pushing further development. It’s just a “text file.”

The project appears so simple. To some it’s genius. To others it’s beyond ridiculous to spend the kind of money people are spending on Loot bags.

The situation makes me think of an old (probably apocryphal) Pablo Picasso story. The basic story goes like this:

Picasso is sitting in a Paris cafe when a fan approaches him and asks that he do a quick sketch for him. Picasso agrees, does a quick drawing on a paper napkin, hands it to the fan, and asks for [a large sum of money]. The fan is shocked. “How can you ask for so much? It took you only a minute to draw this.” Picasso replies, "No, it took me 40 years to do that."

The story is often referenced as a rebuttal to supposed overnight success narratives (which is probably applicable here too), but the lesson that I want to focus on is about value and meaning.

A hasty Picasso sketch isn’t going to be overly complex or necessarily “good” even though he’s been training his whole life. But for most art collectors, the sketch will have a deeper meaning. It will create a visceral impact. That comes from Picasso’s other works, his life, and the origin story of this particular drawing. Even if you have no appreciation for the art, you can accept as a social fact that even a Picasso drawing on a napkin is valuable. The same can dynamic apply to a simple NFT text file or digital land...

There are very few Picasso-level geniuses (or reputations) that can summon this sort of dynamic on command, but that doesn’t mean that other creators can’t tap into it at their best and/or when luck strikes.

The most powerful source of value for art, entertainment, and even businesses comes from the feelings evoked and the personal meaning ascribed to the thing. In the digital world where abundance is the default (i.e., more and more of our basic needs are covered), this will only become more true.

Time will tell if Loot is just overhyped, fleeting speculation or if it’s successfully tapped into something more durable (childhood memories of game play) with new coordination mechanisms. Judging by the amount of community development the project has already inspired, count me as a believer in the latter scenario.

As we get closer to our mainnet launch for the Geo Web, I think about this sort of thing quite a lot. Our ambitions for the project are objectively crazy, but the starting point, a digital land registry, is quite simple. How can we pull it off? Why are we even attempting it?

For me, the Geo Web is best described as putting ideas that I think make for a better world into action. As a nerd, sure, I’m excited about the technical elegance and mechanism design that’s possible with smart contracts. Seeing a world filled with physics-defying digital art and architecture will be mind blowing too. But, the Geo Web’s opportunity to tangibly improve the economic and social prospects for so many through cooperation is what strikes a deeper chord for me.

It will be our ability to inspire buy-in to that feeling that will ultimately drive our success or lack thereof. An optimistic, collaborative future is the meme that we need to plant into the brains of early adopters. Personal meaning will bootstrap the Geo Web’s value into existence. And someday, those dismissing our concept of digital land as worthless/silly/invalid today will have no choice but to acknowledge the social proof to the contrary.