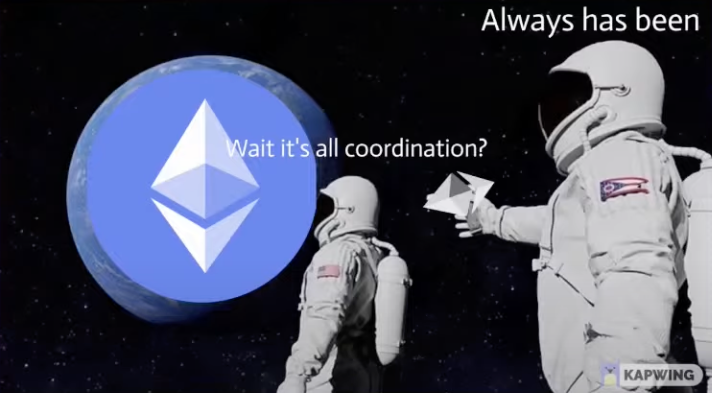 Wait, it’s all coordination? Always has been.

I took last week off from the blog to immerse myself in the MCON conference held in Denver. If you weren’t there, you can catch replays of the talks here.

The talks were interesting, funny, inspiring, and to the uninitiated, probably insane. As great as the talks were, the vibes of being there and having side conversations were even better. This post isn’t intended to rub it in if you couldn’t attend, but instead to perpetuate the vibes that I felt there into the world.

In the 90s, there were a lot of techno-utopian visions for the future. Those “in the know” saw the world changing potential of the internet and the web. It’s hard not to be optimistic about the future when you see nearly limitless opportunities to explore, learn, and create.

Well humans are humans. We adjust to previously unimaginable wealth, knowledge, and comfort. The awe-inspiring becomes ho-hum. At some point the previously inexhaustible landscape ahead starts to look a little crowded. The deviators start outnumbering the cooperators. In turn, Web 2.0 has become about capturing more of the pie rather than ever faster growth of the pie.

Today at the cusp of Web 3.0, there’s obviously plenty of optimism. The opportunities seem limitless. It’s easy to choose cooperation over competition. Sounds an awful lot like the early 90s. Are we just setting ourselves up for an inevitable let down?

It is different this time because we’re standing on the shoulders of giants. The foundational technology that we’re building on (strong encryption, blockchains, crypto economics, and so much more) really can create more durable ways to promote coordination and to be inclusive of more minds around the world. We’ve unlocked new levels of coordination. The results are going to be mind-blowing.

We’re at the beginning of a technology driven S-curve even bigger than the last one. But it still is an S-curve. There will inevitably be bumps in the road, but I don’t think we’re in for multi-decade setbacks or delays.

We aren’t going to completely overcome human nature with Web 3.0 and create a utopia. But with thoughtful, selfless leaders like I encountered at MCON and the leverage of today’s technology, we won’t just “enforce” coordination in this era, but inspire it.

So, our job as early pioneers of this era is not just to build the right technological primitives (super important), but set the vibes for this new era. If we do both, we’ll extend the potential of this cycle to even higher heights.

After last week, I believe more strongly now than ever that we can do just that.

Check out the Geo Web Garden. We’re constantly pushing status updates, writing, specs, and meeting notes there. Of note is our Roadmap to Mainnet doc. It’s not final, final, but we feel good about this outline. There’s still a decent amount of work to be done and we’re always open to new contributors…