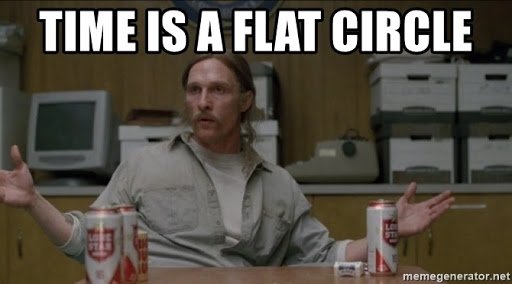 The Flat Circle of Web2

It’s earnings week for the publicly traded tech/social media giants. While I’m firmly entrenched in building/contributing to web3, I still pay attention to the latest developments in web2 (there’s still a lot to learn, know thy enemy, etc.).

*H/t to Ben Thompson of Stratechery—his analysis this week was the jumping off point for this post and more broadly a lot of learning and thinking that I’ve done over the years.

The big narrative this week is the impact of Apple’s “app tracking transparency” (ATT) framework on app-based advertising companies like Snap and Facebook. Ostensibly, the ATT changes are driven by Apple’s desire to offer more privacy for iPhone users…

Apple hasn’t announced their earnings yet, but it’s safe to assume that ATT will have a big, positive effect on Apple’s own advertising revenue short and long-term. I’m not here to rehash the finer points of the battle for billions of advertising dollars between tech giants though.

I’ve been pretty cynical about the current state of big tech for a while which is why I was drawn to crypto and web3. Reading the analysis, executive comments, and reports this week that focused so much on the big business of ads only furthered that. There is a zero percent chance that the amount of talent, time, and money spent in service of ad targeting is the “optimal” allocation for our society. Advertising can create value by introducing a product/service to a buyer who realizes consumer surplus by owning/using/consuming it, but there are definitely diminishing and negative returns especially for the consumer.

Regardless of their founding origins, Snap, Facebook, and their web2 peers are public companies whose existence is now justified through finding ever-better ways to monetize attention. It is inherent to their structures. There is no going back for them.

Facebook (or whatever they rename themselves this week) are on pace to lose $10 billion this year in their Facebook Reality Labs division (AR/VR division). That investment pace is only going to accelerate. Even if Zuck’s metaverse intentions as de facto dictator of Facebook are pure, the incentives for the public company apparatus around him are to turn that investment into the next generation of platform monopoly/duopoly that Apple just “abused” them with. As Rust Cohle said, “Time is a flat circle.”

It is abundantly clear to me that the core platforms and protocols that underpin our shared reality as a tech-based society should not be subject to these sorts of incentives. We want our best, brightest—all of us—approaching the messy, value-based trade-offs found at the intersection between technology and society without having to factor in the effects on ad attribution. Those discussions can exist elsewhere in the stack, but not at the foundation.

We don’t have all the answers at the Geo Web or in web3 of course, but I couldn’t be more confident today that “we” should all want the metaverse to be built through open-source, public good projects.