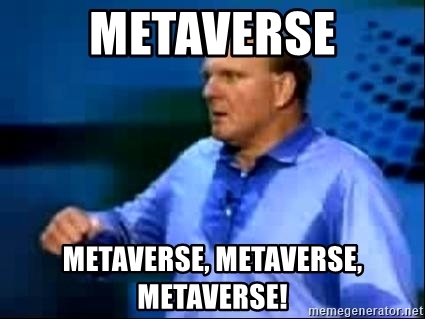 We front-ran the Facebook, ehm Meta, event last week with our strongly held view that the future of the metaverse/embodied internet/hyperverse/who-knows-what-it-will-be-called should not run on core infrastructure controlled by any private corporation. The incentives are just wrong for something this important and always will be.

Anyway since then, there have been roughly a million metaverse explainers, think pieces, and hot takes. I don’t think this will be AR/VR’s “iPhone moment,” but it is something. We have a long way to go before half of the stuff presented in the Meta “film” becomes...reality, but this does feel like a major catalytic moment.

It was energizing for me even though we’ve been expecting and prepared for Facebook (and other giants like Apple and Microsoft) to try to stake claim to the territory. The threat just feels more tangible.

The response in the open metaverse space was very 2021 in some ways (some coins mega pumped), but also very heartening: respected leaders in the space like Avaer Kazmer, jin, & Tony Parisi started (really continued) rallying the troops.

For Web3/open source to win out, we need to out-collaborate the tens of billions of dollars pouring into proprietary systems (even those that claim they’ll be benevolent dictators because they’ve “learned from their experiences on other platforms”).

At the Geo Web, our focus is on building the right base layer of incentives and property rights to encourage coordination and innovation the space needs. We’ve done a good job (I think) of partnering with great Web3 projects like Ceramic, IPFS, Filecoin, etc. but haven’t focused enough on the XR technology side to-date. We’ve long been aware of projects like WebXR, three.js, etc, but we’ve almost taken the composability of open standards and the potential collaboration for granted. That must and will change soon as our mainnet launch comes into view...